As we stated before you are giving all your life valuables to this stranger, it would be good to know how they operate right? There are two good places to background check your moving company:

This is the very first place you want to check. Here is where you can see if the moving company is actually authorized to move, under authority. While it may seem crazy, many moving companies, especially in the bad category, have lost their moving authority yet still do moves anyway. This is information that you should know prior to hiring the company.

The general info will tell you everything you need to know at a glance. It will let you know what type of authority the moving company has (broker v. carrier) and if the authority is still valid.

1 ) First we want to look to see what type of business this is and if it has active authority.

As you can see in the red boxes, this business is a carrier and it has active authority.  That’s good as it means that the company has the authority to pick up your goods and deliver them.  One thing to note, however, is that this company only has 4 drivers.  While this isn’t necessarily a bad thing, it does suggest that if you are moving during the heavy moving season (May-September) you may experience some long delays.

B) Now lets take a look at Mayflower Transit, one of the largest moving companies in US. 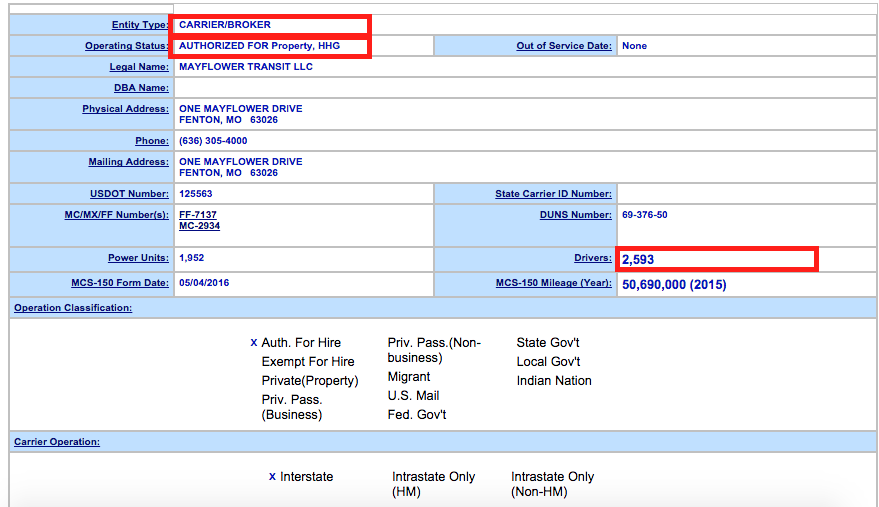 Here you can see that Mayflower has both broker and carrier authority, meaning that it can contract out the job to other carriers as well as carry your goods itself.  Now this may sound like a bad thing (as you don’t want your goods to be contracted out to some unscrupulous third party), but in Mayflower’s case they have carrier authority in the sense that it will contract its moves out to different subsidiaries of Mayflower typically (such as Mayflower in Kansas city).  Another key thing to look at is the amount of drivers Mayflower has 2,593.  While this doesn’t mean that there won’t be delays, it is safe to say that there would be generally less delays than the company shown above.

2) Next we will look at the classifications, operation type, and cargo the carrier is allowed to carry.

A) We will first take a glance at the small moving company.

Here you can see that the carrier has authority for hire which is good.   Looking at carrier operation though, this carrier can only transport goods intrastate (or within the state).  This isn’t a problem if you are moving from say San Francisco to San Diego, but if you are doing an interstate move (between different states), this carrier cannot carry your goods (which is probably why it has such a small fleet size).  It’s good to note that it does have household good moving authority, however, so if you are moving within the state, this company would check out for minimum requirements.

B) Now let’s take a look at Mayflower.

1) It will then take you to the insurance page. First what you want to check is if the authority is active as you see here.

2) Now it’s time to take a look at the insurance. Right beneath authority, you can see active/pending insurance.

The one insurance that is mandatory is 91x, which is for damages that the moving company does to OTHERS (not your stuff). The minimum a company is required to have is 750,000 in insurance but usually more reputable companies will have 1,000,000.

3) The next line of insurance that is not mandatory since 2011, but many companies will have, is cargo insurance, Form 34.

As you can see here the limit is 5,000 per cargo, which includes everything that the carrier has in the truck.  Here is an example of  a good moving company that has both increased its 91x insurance as well as has cargo insurance.

5) The last part of this page that we want to take a look at is the authority history.  This part will give you the records of any times that a motor carrier has lost its authority to move and when that occurred.

Many times when you choose a less than great moving company and it is having an unusually long delay, you can find that they had their authority revoked and reinstated recently.  Bad or ugly moving companies don’t stop business when they lose authority, they keep on taking orders and just create a large back log.  As you can see below this moving company has lost its authority for almost 2 years and it was the same one that had only the minimum $750,000 of insurance shown above.  While we mention throughout our guide that each mis step doesn’t necessarily mean you are doomed if you choose the company, there is a trend.

For an interstate move we are looking for:

2) To move interstate and

For Insurance, ideally we want:

1) The carrier has active authority

Here you can see the fleet size and the amount of complaints the carrier has received.

A) Here we have a small bad moving company.

Right away we should take notice that this moving company does not have the authority to move.  If you had done the proper background check on the license and insurance you would have already seen this, however, if you missed it before, here is another notice.  So if you didn’t hire this company yet, it would be a good idea to avoid them, or if you hired them, be prepared for a delay.  Usually this should end your check, however, for learning purposes we are going to go further.

Next we want to take a look at the safety rating. Typically a good moving company will have a safety rating like satisfactory.  Here this company does not have one, which is a bad sign.  Last, in this section we want to compare complaints v. fleet size.  Every company is going to receive complaints, no matter how good they are.  It is important however to measure how many complaints the company receives v. its size. For example if it is a large company and it has some complaints that is is to be expected, but if it is a small company and has many complaints thats a warning sign.  Here the company only has one truck registered and racked up 10 complaints, which is a pretty high number.

B) Now we will take a look at Mayflower again for an example of a good moving company.

Here you can  see that Mayflower does not have any issues with its authority written above. In addition, it has a satisfactory safety rating.  Most importantly though look at its fleet size compared to its complaint amount.  Mayflower has 498 trucks and has around 10 complaints this year v. the small company that has 1 truck and has 10 complaints this year.  That’s around a 5% complaint rate per truck v. a 1000% complaint rate per truck.

Now beneath the general section are the complaint categories.  This is important to show you what type of complaints are occurring. Most of these complaints occur with any company but the most important complaint to watch out for is hostage.  Hostage is what we described earlier as when the carrier will hold onto your goods and will not release them until you pay a higher price (similar to a hostage situation with a person).  Also just to avoid confusion, there can be several complaint types per complaint, which is why the complaints add up past 10.

A) First lets take a look at the small company again.

Looking first at the hostage situation, there were 2 complaints filed in 2016.  Right away this would be a warning sign to not use this company. In addition there are 5 complaints of deceptive business practices.  Considering the volume that this company experiences with only 1 truck, this is a high percentage of bad practice.

B) Now let’s take a look at Mayflower.

Mayflower has 0 hostage situations and only 1 deceptive business practice complaint.  These are pretty great numbers given the size of the company and its fleet, for a company of this size it would not be that strange for it to experience at least 1 complaint in every section if not more.

1) whether the carrier has authority (again it is necessary to move,

3)complaint amount v. truck amount (if there are few trucks there should be few complaints) , and

4) whether the company has hostage/ deceptive practice complaints (ideally 0 for both).

In addition to looking at the Federal Complaint History, you can also check the Better Business Bureau, and just perform a google search for the company (remember there are a lot of fake reviews out there so take each good one with a grain of salt).

Continue to Extra Tips for Choosing your Company
Toggle the Widgetbar